I was born between the Creggan and the Bogside
to the sounds of crowds and smashing glass,
by the river Foyle with its suicides and rip tides.
I thought that city was nothing less

than the whole and rain-domed universe.
A teacher’s daughter, I was one of nine
faces afloat in the looking-glass
fixed in the hall, but which was mine?

I wasn’t ever sure.
We walked to school, linked hand in hand
in twos and threes like paper dolls.
I slowly grew to understand

the way the grey Cathedral cast
its shadow on our learning, cool,
as sunlight crept from east to west.
The adult world had tumbled into hell

from where it wouldn’t find its way
for thirty years. The local priest
played Elvis tunes and made us pray
for starving children, and for peace,

and lastly for ‘The King’. At mass we’d chant
hypnotically, Hail Holy Queen,
mother of mercy; sing to Saint
Columba of his Small oak grove, O Derry mine.

We’d cross the border in our red Cortina,
stopped at the checkpoint just too long
for fractious children, searched by a teenager
drowned in a uniform, cumbered with a gun,

who seemed to think we were trouble-on-the-run
and not the Von Trapp Family Singers
harmonizing every song
in rounds to pass the journey quicker.

Smoke coiled up from terraces
and fog meandered softly down the valley
to the Brandywell and the greyhound races,
the ancient walls with their huge graffiti,

arms that encircled the old city
solidly. Beyond their pale,
the Rossville flats – mad vision of modernity;
snarling crossbreeds leashed to rails.

A robot under remote control like us
commenced its slow acceleration
towards a device at number six,
home of the moderate politician;

only a hoax, for once, some boys
had made from parcel tape and batteries
gathered on forays to the BSR,
the disused electronics factory.

The year was nineteen eighty-one,
the reign of Thatcher. ‘Under Pressure’
was the song that played from pub to pub
where talk was all of hunger strikers

in the Maze, our jail within a jail.
A billboard near Free Derry Corner
clocked the days to the funerals
as riots blazed in the city centre.

Each day, we left for the grammar school,
behaved ourselves, pulled up our socks
for benevolent Sister Emmanuel
and the Order of Mercy. Then we’d flock

to the fleet of buses that ferried us
back to our lives, the Guildhall Square
where Shena Burns our scapegoat drunk
swayed in her chains like a dancing bear.

On the couch, we cheered as an Irish man
bid for the Worldwide Featherweight title
and I saw blue bruises on my mother’s arms
when her sleeve fell back while filling the kettle

for tea. My bed against the door,
I pushed the music up as loud
as it would go and curled up on the floor
to shut the angry voices out.

My candle flame faltered in a cup;
we were stood outside the barracks in a line
chanting in rhythm, calling for a stop
to strip searches for the Armagh women.

The proof that Jesus was a Derry man?
Thirty-three, unemployed and living with his mother,
the old joke ran. While half the town
were queuing at the broo, the fortunate others

bent to the task of typing out the cheques.
Boom! We’d jump at another explosion,
windows buckling in their frames, and next
you could view the smouldering omission

in a row of shops, the missing tooth
in a street. Gerry Adams’ mouth
was out of sync in the goldfish bowl
of the TV screen, our dubious link

with the world. Each summer, one by one,
my sisters upped and crossed the water,
armed with a grant from the government
– the Butler system’s final flowers –

until my own turn came about:
I watched that place grow small before
the plane ascended through the cloud
and I could not see it clearly any more. 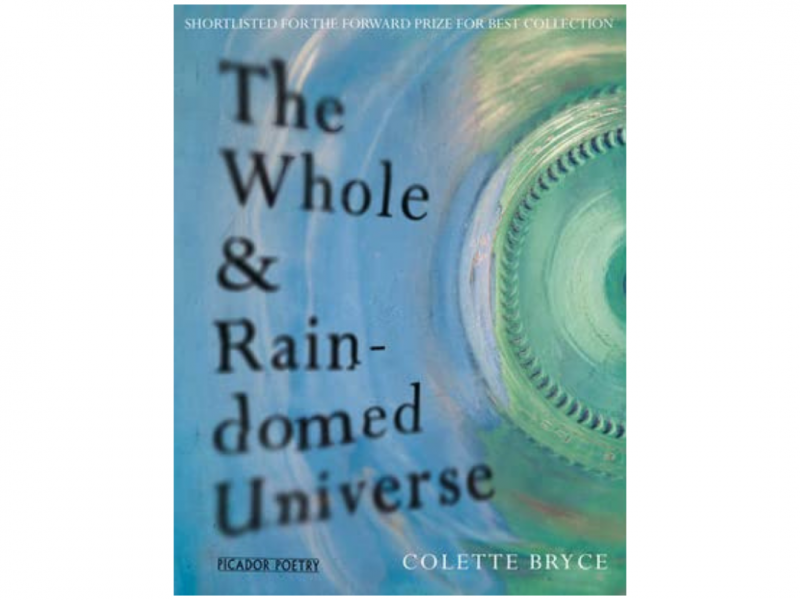 From The Whole & Rain-domed Universe. Reproduced with kind permission from Picador.

About Colette Bryce Read 'A Clan Gathering'
We use cookies on our website to give you the most relevant experience by remembering your preferences and repeat visits. By clicking “Accept All”, you consent to the use of ALL the cookies. However, you may visit "Cookie Settings" to provide a controlled consent.
Cookie SettingsAccept All
Manage consent