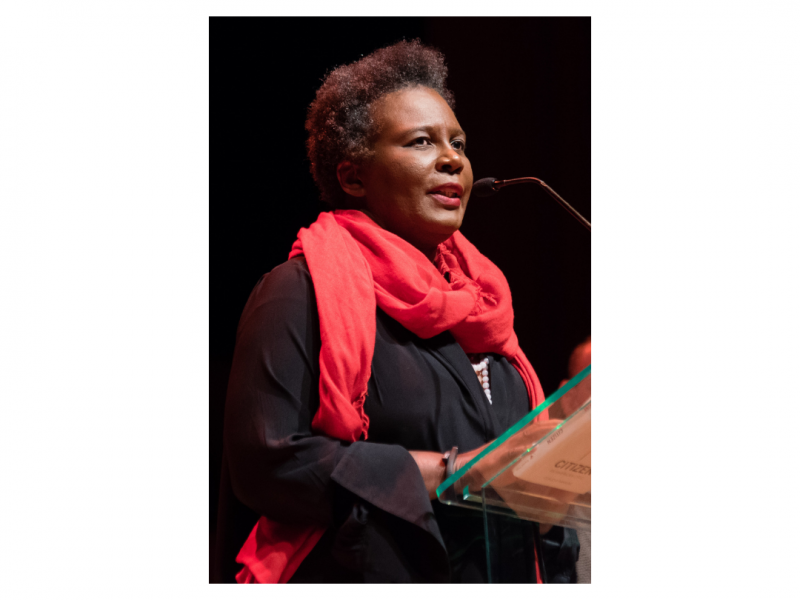 Claudia Rankine (b. 1963, Kingston, Jamaica) began writing poems at Williams College, Massachusetts, after studying the poetry of Adrienne Rich. She wrote about embarking into the places where language failed us. For whatever reason, this seemed like an invitation.

She decided against law school to pursue creative writing: ‘Being a poet seemed like a risky career choice, but it felt like a calling – I didn’t argue.’ Her poetry, plays and criticism have been widely honoured: she is currently a chancellor of the Academy of American Poets and Professor of English at Pomona College, California.

Citizen: An American Lyric (Penguin Books 2015) may seem at first glance to the casual reader not to be poetry at all but a collage of prose, graphic art, photography and scraps of documentary film script. It won the National Book Critics Circle Award for Poetry in America after becoming the first book in the prize’s history to be a finalist in both the poetry and criticism categories, causing considerable confusion to booksellers and librarians along the way.

The form of the collection, she says, is ‘both archival and curatorial’: it came about ‘by asking friends to share their stories regarding interactions with either friends or colleagues.’ She stresses that many of the stories of everyday racism recounted in Citizen are not her own.

On being asked what the nomination for the 2015 Forward Prize for Best Collection means to her, she says: ‘I am filled with gratitude that the concerns of Citizen are being recognized as legacies of our shared postcolonial past.’

Read 'In line at the drugstore...' Watch ‘the new therapist specializes...’ Animation Claudia Rankine in Conversation with the Forward Prizes
We use cookies on our website to give you the most relevant experience by remembering your preferences and repeat visits. By clicking “Accept All”, you consent to the use of ALL the cookies. However, you may visit "Cookie Settings" to provide a controlled consent.
Cookie SettingsAccept All
Manage consent