My Name is Dai

I heard him say his name was die, and seconds later that it was short for
David, spelt D-A-I. We had just sat down when he walked up to me
and Susie. He said he recognized her from the National Portrait Gallery.
The one with the large forehead above the door. People miss it. The sad
smile. Beer sloshed against the edges of his glass like a fish trying to
escape its bowl, but in this case the fish was dead and only looked to be
alive because of Dai’s swaying. There are people who relieve themselves
of information like a dog pissing against a streetlamp to mark out
territory, urination no longer in the service of the body, providing no
relief. Likewise, conversation. Dai was a type of Ancient Mariner.

It was in his bones. He’d been working on a site with Polish builders
and it was one of their birthdays. He mimed plunking bottles on the table.
Vodka. Whole bottles? I’m Welsh, he said. I was born on a mountain.
Between two sheepdogs. He started talking about the village he grew up
in, how happy he was among the meadows and milking cows, how
unhappy he was at school. You might’ve heard of one boy from school.
A right goody. Spoke like Audrey Hepburn or Shakespeare. We all bullied
him, but my mam would say why don’t you be like Michael, why don’t you
be like Michael. Michael bloody Sheen. Michael’s shirts were always
clean and ironed. Anthony Hopkins, he was a local too. A tiny village,

and who came out of it? Those two and me. You know, I probably know
more words than anyone in this pub. Look at them. You think any of these
cunts can spell verbiage? He spat out each letter – V-E-R-B-I-A-G-E –
and in the act of spelling became self-conscious. He turned to Susie.
What do you do? She was a writer so he told her more words. I said
I taught a little and wrote. Teach me, he said. Go on. But I couldn’t think of
anything wise or useful to tell Dai. On the verge of tipping over, he
held a hand out towards us. Tenderness, he said, try a little tenderness,
and then repeating it, half singing it, he said it in a voice both louder
and more tender. That’s my advice. You know who that is? Otis Redding.

Try a little tenderness, mmm nuh uh uh. That was when Susie saw
the haze descend. Like an explosion in a quarry the inward collapse
rippled out across his face, throwing clouds of dust into the sky.
I’m sorry. A man shouldn’t cry. I haven’t cried since I was a boy.
I haven’t . . . He stopped. A man should be a brick, a boulder. He made
his hand into a fist like he was playing rock-paper-scissors in the
schoolyard. My ex-wife died last month. The funeral was yesterday.
We were together twenty years but her family, her bloody family,
wouldn’t let me near it. God, he said, I loved that woman. He couldn’t
say her name. He was swaying. I got the impression that he saw

his life as a sea voyage during which he’d done many strange, inexplicable
and stupid things, of which shooting an albatross was one. But perhaps
he knew it was better to have shot that albatross through the heart
and be able to talk about it than to bear it having entered his life and
gone. It was then I saw the TV and pointed. Look! Michael Sheen.
It was true. There he was on The One Show in a freshly ironed shirt,
smiling at Matt Baker. Dai turned around. I’m sorry. I don’t know
what came over me. I need some air. He stared at us. You’re writers,
he said. You should write about this. And though it may have been
unfair, I thought about how many people he’d said this to before. 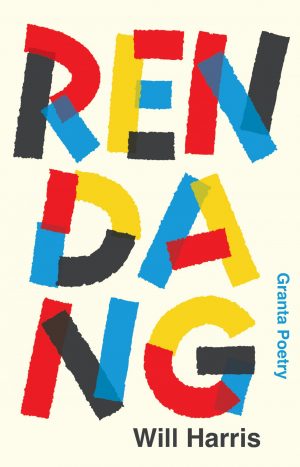 From RENDANG. Shortlisted for the Felix Dennis Prize for Best First Collection 2020. Reproduced with kind permission from Granta Books.

About Will Harris Will Harris in Conversation with the Forward Prizes Read 'Say'
We use cookies on our website to give you the most relevant experience by remembering your preferences and repeat visits. By clicking “Accept All”, you consent to the use of ALL the cookies. However, you may visit "Cookie Settings" to provide a controlled consent.
Cookie SettingsAccept All
Manage consent