To the school: I am delivered. A three-hour drive north, through a valed
land replete with cathedrals. There is Amiens, with its traces of paint, still;
and Chartres of the windows; Beauvais, unfinished – three times its spire
fell through; now it is braced with wooden beams: on crutches. It boasts
the highest clerestory in Europe, it smells of mouldering stone. Rheims
where are buried the kings; Coulombs which boasts the foreskin of the
Saviour. Under the Channel, to burst forth near a hill where runs a horse
white in chalk.

(I remember that boat, smallest to answer the call.)
(Named Tamzine, it lies on the floor of the museum for imperial war.)
(The littlest of the little ships of Dunkirk,
clinker-built from Canadian spruce.)

The school is of flint and brick, it too has a cathedral.

At the boarding house, which is new, but built out of the ruins of the old
infirmary ten centuries old, another mother is wearing a poncho. She asks
where we’re from, how we got here. At my mother’s reply (the Eurotunnel)
she says Oh well you will have come in under our land then.

I am unpacked and stowed away.

Later that night, the others start to arrive. There are five blondes in a total
of twelve. There is lacrosse gear and lurid pink mouthguards. Their jeans
are different from mine (tighter). I have never seen so many sets of big
breasts. Their hair is mid-length (it swishes). Their clothes are all
somehow the same.

(The others wait politely for my reply)

The land seemed so old, but deluded also.
The white horse that leaps on the green hill, singing in chalk,
is a copy.
The stone of the cathedral came from Caen, where as a child in an
oversized fleece
I stood in a very large crater near the Museum of Peace.
‘My father was at D-Day and was shot in the hip, he lay on the beach in
the surf for three days.’
My godfather has my baby sister strapped to his chest.
This cool cold plain of Europe’s beige edge is on par with Mont St Michel,
its
great flat-footed expanse where my brother and I dig its ridges for clams
before the tide
comes running.
This is deep bone-knowing country.

I hold it in my mouth with pleasure like a corp
ulent pearl.
It contains all the stories England tells itself:
a plosive, bounded space, girded by neat cliffs and land’s end.
How they thought of their virgin queen,
the whole universe under her skirts.

The dean beckoned me and with his thumb
Upon my forehead said admitto te
And I having for sole reference the Simba smudge, stumbled on the stiff
white surplice lent to me on a two-year lease.

Food was a thing ingested under mild duress.

My femalehood was boarded over my eyes like a set piece.
To determine its deviance became the all-consuming aim.
Cover your shoulders.
Shoulders remind boys of boobs.
My body became as incendiary as a vernacular.
It was the thing that lay in the dark woods at the trailing ends of
sentences,
at the short edge of night and late at skirt.

The blonde others aspired to be described with mean, hard-nosed little
words: thin, pretty, nice.
I wanted big-femur words like wise and kind.

The boys were always
touching
each other.

When the parents came, they were loud.
They came two by two in pairs of Sunday-lunching racists.
The fathers wore trousers the colour of rare meat.

In the paintings which depict the lead-up to Becket’s braining,
he looks so meek.

How much
I would have liked
to have been first to thumb-flick a flame
and behold the stamping procession of beasts
at Lascaux or Chauvet.
How I would have liked
to know that fear.
To see those who had professed
with smudge of opposable thumbs.
The paintings had been sleeping, stoppered up
for sixty thousand years
it is said they were so fresh, after the finding
there was still charcoal dust.
It is the same
as standing in the transept
itching in a cassock

in the dark:
this too like a thumb on stone.

A ruddy smudge in the bridge of my knickers (one of the truly good
English words). I thought:
‘I have begun to bleed. Perhaps I am a woman now.’

There was a history paper entitled BRITISH FOREIGN POLICY OF THE
19TH CENTURY, sponsored by the board of English education. It stopped
at 1890. Through its opiate emissions it fed them sugar-pills of who they
were. This was also the time when the first queen regnant to give birth did
so and with her many-fruited womb once again was emblematic of the
pink stain on an atlas third. I saw that it was dangerous to subscribe.

(Roll your skirt up at the waist.)

Lifesize statues of a naked man with our sightlines up his loincloth.
Surplices smoothing over tits.
We were made to carry hymnbooks in blue and gold, which had some
variation on:
JESUS IS HOT
FUCK
(_)
_____-) – – – –
(_)
In four-way biro: green.

Once a month came round
the metallic, zincish smell in the corridors, of all our clumping blood in
bins

In the run of evenings the flatline pallid blue shaded to plum,
the cathedral kept thrusting up: centripetal, unrenounced.
I am English en-lessoned. We are being taught ‘The Flea’.
This flea is you and I, and this
Our marriage bed… w’are met,
And cloistered in these living walls of jet
I think of a bed: one of those little beds, short and tight in stately homes.
Thick-curtained against the cold. This seemed to me at the time of my
buttressing in pinstripes, to be something rich and strange I wished to
know.
buttress, n.: a structure of stone or brick built against a wall to strengthen
or support it
buttress, v.: increase the strength or justification for; reinforce.
In the great age of cathedrals, flying buttresses were instated to counteract
the lateral forces of high walls and naves, which would seek to burst open.
They were like ribs –
A universe so newly heliocentric. How afraid he must have been.

There is a word that appears only six times in our language, banhus
meaning bone-house. This is called a kenning, a word only a hundred
and fifty years old. It comes from the Old Norse kenna, to know, to
perceive. If I were to ask my mother she would say that German kennen
is for knowledge that is already within, and wissen is for knowledge
that enters. Ken is excused of empiricism. In Old English scholarship,
a kenning is a compound word, but a purposefully poetic one; it is a
metaphor compressed. Thus a bone-house is a body. A house made of
bones is like a great hall in the time before cathedrals, beam-ribbed.

My body is a hall on a hill in the dark.

Give me a life of bleeding on your behalf!

I had teachers who nudged me towards the open hungry vowels of the
marrow-cracking class
and led me to literature, which was a great fridge in the middle of the
night and I was starving,

(sixteen and straining in my pinstripes).

So I came to texts, and those who have been appointed to tell us what they
mean. I sympathised with those spined creatures we split open on desks,
discerning their dispossessed. Jesus was in everything; a bore.

Then there was
Rest your human head, my love
(how often I would think of that in the grey half-heart of a Wednesday
dawning)

At the school I learned:
to twist praise and to deflect it always
that boys were growing men with needs
that I was disgusting and, at best, allegorical.

At events I was made to stand in-stalled in a sundress and smilingly scoop
up clotted cream to fathers who wore no wedding rings.

Lesson:
In the lift there is one man.
We are standing diametrically opposed
across the textured linoleum mat.
This is how he tells me
he won’t strangle me in this shut
shaft-shuttling box.
He is being demonstrable.
He hates me that he has to. 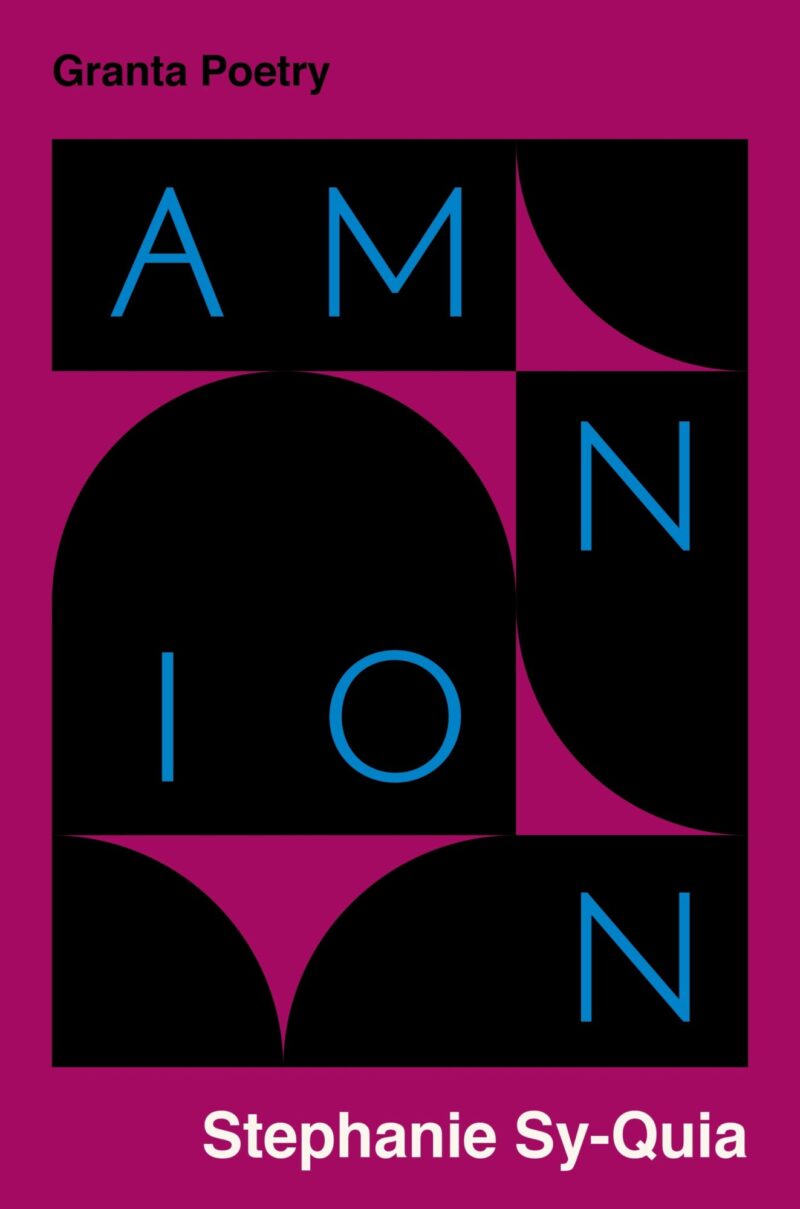 From Amnion. Reproduced with kind permission of Granta.

About Stephanie Sy-Quia Stephanie Sy-Quia in Conversation with the Forward Prizes
We use cookies on our website to give you the most relevant experience by remembering your preferences and repeat visits. By clicking “Accept All”, you consent to the use of ALL the cookies. However, you may visit "Cookie Settings" to provide a controlled consent.
Cookie SettingsAccept All
Manage consent