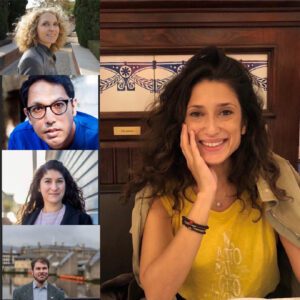 Celebrated novelist and activist Fatima Bhutto will be this year’s Chair of Judges. She will be joined by poets Rishi Dastidar, alice hiller, Nadine Aisha Jassat and Stephen Sexton.

“Poetry is the art of the people and the times we live in. It’s an honour to be the chair of judges for the Forward Prize this year and to be spending time in the company of my very talented co-judges as we dedicate our attention to the wider world of contemporary poetry.”

Fatima Bhutto is the author of several books of fiction and nonfiction, most recently the novel, The Runaways, and the nonfiction reportage about globalisation and popular culture, New Kings of the World.

Stephen Sexton’s first book, If All the World and Love Were Young was the winner of the Forward Prize for Best First Collection in 2019 and the Shine / Strong Award for Best First Collection. He was awarded the E.M. Forster Award from the American Academy of Arts and Letters and the Rooney Prize for Irish Literature in 2020. He was the winner of the National Poetry Competition in 2016 and the recipient of an Eric Gregory Award in 2018. Cheryl’s Destinies was published in 2021, and was shortlisted for the Forward Prize for Best Collection.

Writer and activist alice hiller’s debut, bird of winter, was shortlisted for the 2021 Forwards Prize for Best First Collection and the 2022 John Pollard Prize. Author of The T-Shirt Book, she has reviewed widely, and holds a PhD from UCL. alice blogs, podcasts and interviews about entering unspoken spaces and ‘saying the difficult thing’ at alicehiller.info. She  founded thewww.voicingoursilences.com collective. She’s also the creative director of the Oscar Nemon Estate (www.oscarnemon.org.uk). For 2022, alice is curating Dancing with Shadows, exploring the impacts of genocide on Nemon’s work of the 1940s.

Rishi Dastidar’s poetry has been published by the Financial Times and BBC amongst many others. He is a fellow of The Complete Works, a consulting editor at The Rialto magazine, a member of Malika’s Poetry Kitchen, and chair of writer development organization Spread The Word. A poem from his debut collection Ticker-tape was included in The Forward Book of Poetry 2018, and his second collection, Saffron Jack, was published in the UK by Nine Arches Press in 2020. He is also editor of The Craft: A Guide to Making Poetry Happen in the 21st Century (Nine Arches Press), and co-editor of Too Young, Too Loud, Too Different: Poems from Malika’s Poetry Kitchen (Corsair).

Nadine Aisha Jassat is the author of Let Me Tell You This, praised as ‘beautifully written, immense and full of passion’ by Nikita Gill and ‘a joy both live and on the page’ by Hollie McNish. She has been published widely; including in Picador’s It’s Not About the Burqa (shortlisted for the Foyles Non Fiction Book of the Year) 404 Ink’s Nasty Women (‘essential’ – Margaret Atwood), and Bloodaxe’s Staying Human. Nadine has performed internationally, including with Edinburgh International Book Festival’s Outriders Africa, and has appeared across media, from BBC’s The Big Scottish Book Club to South Africa’s Cape Talk Radio. She has taught creative writing across the UK and internationally, with clients including BBC Words First and The Arvon Foundation. Her work has drawn significant acclaim: including winning a Scottish Book Trust New Writers Award, and being shortlisted for the Edwin Morgan Poetry Award. Nadine was included in Jackie Kay’s International Literature Showcase selection, with Kay writing: ‘Hers is a powerful, unforgettable new voice.’

Contact Us
We use cookies on our website to give you the most relevant experience by remembering your preferences and repeat visits. By clicking “Accept All”, you consent to the use of ALL the cookies. However, you may visit "Cookie Settings" to provide a controlled consent.
Cookie SettingsAccept All
Manage consent